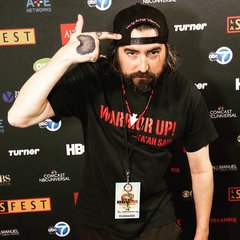 Jay Cardinal Villeneuve (Cree/Métis/Welsh) was born and raised in northern Alberta and is an intergenerational residential school survivor. He went on to study Theatre in College and Indigenous Independent Filmmaking + Cinematography at Capilano University. His short documentary “Holy Angels” produced by the NFB won awards and recognition including a Leo Award for screenwriting in 2018. His comedy “Is That One of Your Jokes” garnered him the Emerging Filmmaker Award at the 2017 LA Skins Fest in Hollywood. And in a career-defining role, Jay plays Martin in the Telefilm produced feature film “Brother I Cry” premiering at VIFF.